Book review of the book "Expat Alien" by Kathleen Gamble

I am so happy that there are third culture kids out there writing books and telling us their story. Kathy Gamble not only grew up abroad but also followed suit. She married a Russian American, moved to Moscow and raised their son there. As an expat parent she raised their cross-cultural kid in Russia. 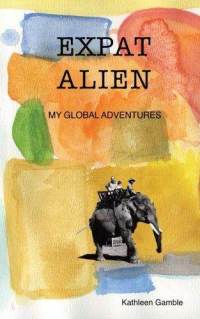 I met Kathy online through her blog Expat Alien. She has written her memoir "Expat Alien, My Global Adventures".

Her parents moved to Burma in the 1950's and that's where Kathy was born. Due to her father's job in Third World agriculture with the Ford Foundation the family moved to Mexico, Colombia and then to Nigeria. At thirteen years of age she goes to boarding school in Switzerland. She likes the school better than the one she attended in Texas for a while. In Switzerland "I felt like I could breathe" she writes. Kathy describes life at boarding school. The food was generally bad and you did not get to choose who you lived with.

While she was at boarding school in Europe she travelled the continent from Venice, Florence in Italy to Paris and London. She learned to ski in St Moritz. Actually wherever she was she travelled. "I used to run into people I knew a lot in airports and museums around the world".

The book gives insight into the life of a third culture kid. Kathy survived a plane crash, an earthquake and a military coup but to her her life was normal. It was only when she moved to California to start college that she discovered that the other girls didn't like her stories of her life abroad. They thought she was bragging or lying. Her first year was very difficult, she suffered from a "reverse" culture shock. I can really identify with this part of the book because my experience was very similar to Kathy's. I went to university in the Netherlands but had a similar experience. Kathy starts to wonder whether there is something wrong with her. During the years in America she never got over the feeling that she was different.

While living in Moscow, in her forties she discovers what global nomads are and that they are also called third culture kids. It was her "aha" moment, this was what she had been looking for. She says that she is not from anywhere. She is a third culture kid, from everywhere and nowhere.

The book is a great read for anyone who grew up globally or parents who are raising third culture kids. If you just enjoy travel and adventure stories then I am sure the book will appeal to you too.