Yesterday my brother phoned and asked me to accompany him to the film Finding Mercy at the International Documentary Film Festival Amsterdam (Idfa 2012). It's a film made by Robyn Paterson who grew up in Zimbabwe, it must have been about the time I grew up there too. Robyn moved to New Zealand and she starts to wonder what has happened to her friend Mercy. So she goes back to look for her. The history of Zimbabwe unfolds through Paterson's discoveries and encounters, and she is confronted with the decline of her homeland, the country she once loved so much. Robyn says: ""What I really wanted to do with this film was to engage viewers with the reality of what has happened in Zimbabwe. To provide a human face to the situation there."

Wow when my brother told me about the film I really wanted to see it. The only problem was that I had promised to take my daughter to the "intocht van Sinterklaas" (the arrival of Saint Nicolas in our town) today. So I had to choose, sometimes when you have promised a child something as a parent you have to just keep your promise. So in the cold we went to see Sinterklaas. Toady I will have to be satisfied with the trailer of the film Finding Mercy. I will share the trailer with you too.


Sinterklaas arrived by boat and them continued his way by horse and carriage. 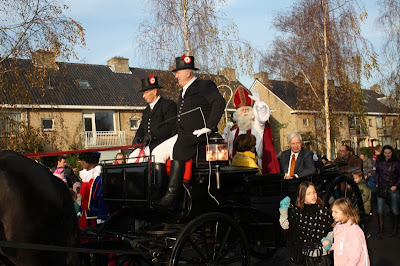 Related Posts:
To or not to do: celebrate Sinterklaas Abroad
Rachel Abroad: The Arrival of Sinterklaas in Utrecht
Cultural Identity Confusion and Third Culture Kids
Marit's tip: The book "Blood Brothers" all about their friendship in Liberia
Posted by DrieCulturen at 12:44