What do you say to your Third Culture Kids?

A while ago I read a piece written by Rachel Pieh Jones and I just knew that I wanted to share it with you. Rachel lives in Djibouti and has raised her children there. I really like the very honest article she wrote: 15 things I want to tell my third culture kids. At the time her children were about to leave to boarding school, they have now left to university.

The quotes that struck me were "I cry for the choices we've made. And then I defend them with passion".

The other quote that impressed me was: "I am sorry for the things life has taken from you. The names of all the friends you have said good-bye to are branded in my mind". 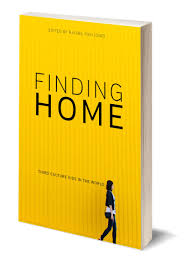 Rachel realizes that she knows what it is like to parent TCKs but she has no idea what it is like to grow up abroad. As you probably know, I grew up abroad and I love the way Rachel tries to understand what it is like for her children and for other kids. A few years ago she hosted a whole guest post series on her blog on third culture kids. She has now made a compilation of these essays, updated the information, added interviews and practical tips and has made it into an ebook.Finding Home. I was privileged to contribute to the series too. I wrote on transitioning globally to university. Many different authors contributed to the ebook: Ruth van Reken, Marilyn Gardner, Mary Bassey, Ma Donna Maurer, Clara Wiggins and Ute Limacher just to name a few.


One of the 5 star reviews said:
"This collection of essays was both relatable and eye opening. As a third culture kid, there was a lot for me to learn and think about after reading each essay. Highly recommended if you want to better understand people who don’t belong in one culture, or if you don’t!"

I would really like to hear what you could say to your third culture kids. One of the things my parents said was that we should dare to be different. Well growing up in Africa I was different, with my blue eyes and blond hair. I actually found it difficult when I was the same as all the other children. I was twelve years old and as a family we spent a couple of months in The Netherlands. I went to form one, but it was a shock to discover that there were three other girls in my class with the same name as I have. I was used to "Janneke" being a really special name, often people had difficulty pronouncing my name. But in the Netherlands "Janneke" is a very common name, especially at that time. There is even a book named Jip and Janneke, Two Kids From Holland. So at the time I had to adjust to the fact that my name was not special at all and even though I looked like the other Dutch girls I was actually different due to growing up in Africa.

What do you say to your third culture kids?

PS. Have you heard that the next Families in Global Transition Conference in 2019 will take place in Thailand? From April 26 - 28.
Posted by DrieCulturen at 13:29