Ever heard of carbide shooting? This third culture kid did it in Malawi

Traditionally carbide shooting is done on new year's day or new year's eve. So last Saturday I went to our family farm in Friesland (the north of the Netherlands) where my uncles just have to shoot carbide. 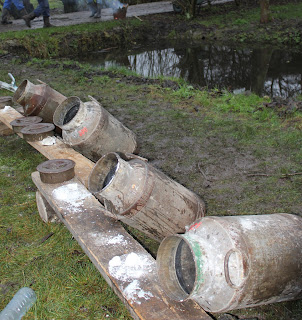 I actually found a website that explains about carbide schooting: a Dutch favourite sport. On the internet I read that carbide shooting is still popular these days in the Netherlands.

When the explosive gas explodes after coming in contact with fire the lid of the milkcan flies about 20 to 30 meters. You have to take care that there is nobody standing in front of the milkcan at the time of ignition. Why do we do it? It's a tradition. Why do we have traditions? By the way in the second world war the carbide stone was used in the carbidelamp a lamp used on bicycles.

When I grew up in Malawi we celebrated new year with carbide shooting too. I have no idea how my father got hold of the carbide stone and maybe it is better that I do not know. I hope he did not take it on the plan, because I can imagine that that would be rather dangerous. In Malawi we did not have a milkcan bit we took a small tin can with a fitting lid, a small whole in it. We added a little water to the carbide stone in the can, put the lid on, added some fire and we made a small bang. So we had no fireworks but just a little carbide shooting. There is no new year's eve without oliebollen (here are soms photos of oliebollen). Would you call it an oil dumpling in English? It is a kind of Dutch doughnut. In Malawi my parents and our Dutch friends always baked a large pile of oliebollen. These are all part of my memories of celebrating new year's eve.

What are your memories of new year's eve celebrations? Do you have special traditions? Have you ever heard or seen carbide shooting? By the way: Happy new year to you!