In my last post I let you know that I was preparing for the Families in Global Transition Conference (FIGT). Well the conference has taken place in Amsterdam. It was the first time ever that the conference took place in Europe. How exciting! By the way the FIGT conference will take place in the Netherlands again in 2017, maybe you can join us? 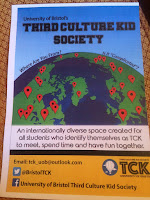 attended in which two university students told us how and why they started a third culture kids society at Bristol university. We had the privilege of having both co-presidents Dalia Abuyasin and Anna Skoulikari from the Third Culture Kid Society of Bristol University tell their story.

On the TCK society Facebook page they start with a definition of a third culture kid: A Third Culture Kid is defined as 'a young person who has spent a significant amount of time in their developmental years outside of their family's country of origin'. Often people that identify as third culture kids reply to the question "where are you from?" with "it's complicated".

The TCK social society is a place to meet, connect and share unforgettable experiences with others. It is a place that is open to anyone and everyone interested in spending time in an international environment. You do not have to a third culture kid to join the society. The society was started by Dalia and Anna. They had no idea how many others students would be interested or had lived abroad for a certain amount of time. Now there is a thriving TCK society in Bristol. They even had short videos so we could hear from them members what it was like to transition to university.

It is even more interesting to hear the members tell about what the third culture kid society has meant to them. They did not need to explain things. It felt so familiar. It felt like "home". This is a short video of about 3 minutes. Listen to what the students say:

As you might know I transitioned from Zimbabwe to the Netherlands when I was 19 to go to university. It was a very difficult transition. On the MaDonna's Raising TCKs blog I wrote about leaving the African "nest". I hope third culture kids these days have easier transitions to university or college! As you can understand this is a topic I am really interested in. A while ago I wrote a post on 10 tips to transition well to university (specially for TCKs and their parents). I wish there had been a TCK society like this one at the university I went to years ago, it would have made my transition easier.

Did you transition globally to university or college? What was it like? Do you know of other universities with groups specially for third culture kids? Please share them here. By the way I just discovered that the University of Leeds is international and have a third culture kids society.