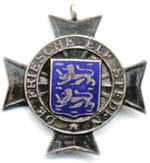 We nearly had an Elfstedentocht this weekend! It is also called the Eleven cities tour on ice skates. There was excitement in the air and in the Dutch media as due to the cold winter weather there was a possibility that the race would take place. Our hopes were high. Even the Huffington post made mention of the possibility of the Elfstedentocht. I discovered that Tommy wrote on his blog Micro Adventures all about the Elfstedentocht in English. Nearly everyone was talking about the race and the newspapers were full of articles all about it: there is ice skating fever in the air.
You need to skate nearly 200 kilometres in one day to gain the "Elfstedenkruisje", this small medal shown on the photo. The race takes place in Friesland, in the north of the Netherlands and that is where my father comes from. I can proudly say that my grandfather and an uncle of mine have in the past completed this race and have the medal.
It is 15 years ago that the ice was thick enough for the race to take place. So our hopes were high but we were disappointed as the officials declared that the ice was still too thin. Aledys Ver writes about it on her blog. Now we need a way to handle our disappointment. Thousands of Dutch people put on there ice skates today and skated on one of the many channels or rivers, just like I did.
Young and old were on the ice. I saw young kids courageously attempting to master the art of ice skating. Falling and being helped up by their parents. These kids were three or four years old. It reminds me of my first time on ice skates. I was twelve or thirteen years old at the time. Way older than all the other Dutch kids who were great ice skaters while I was just starting my learning process. That's what happens when you are a third culture kid and you grow up on the warm African continent.
We did come on leave to the Netherlands every two or three years but we usually came back on leave in the summer. It was more practical to come back to the Netherlands in the summertime because we did not have any winter clothes.
One thing I am glad about is that I did learn to ice skate. I did not give up, I did not give in. Sometimes our learning process is different as third culture kids but we get there in the end and that's what counts! Life is all about learning so just as those kids on the ice fell down and got up again let's do the same. After failing and falling, just get up, dust off the cold snow or ice and try again.
Were there things you learned at another age than kids around you because you were a third culture kid? Maybe you are raising third culture kids, do they have a different learning process than other kids?
Related posts:
Posted by DrieCulturen at 21:38