More than a year ago I interviewed Heidi, author of the book Home Keeps Moving. I really liked the interview so I have decided to repost it. There is a great opportunity to get a signed copy of Heidi's book with 25% discount check her website.

I like her advice for third culture kids or adult third culture kids:
Read as much as you can about TCKs so you can understand yourself better -- connect with other TCKs either in person or online and begin to process the results of your upbringing. Deal with any unresolved anger or bitterness you may have as a result because it will eat you up after a while. And focus on the many positives that such a diverse life has - embrace the uniqueness.

2. What was the reason that you were living abroad? If it was work, what kind of work did your parents do?
My parents were missionaries so that is the reason we lived between India and England all the time, for durations of 8 months - 2 years. My mother started 2 orphanages in South India for unwanted girls and my father taught but also researched different tribal groups.

3. Please tell us about your book "Home Keeps Moving". How old were you when you wrote the book?
“Home Keeps Moving” tells the story of growing up in many worlds due to moving frequently throughout my childhood. It gives a lot of insight into the many struggles and challenges that “Third Culture Kids” face with constantly leaving friends, homes and their familiar surroundings – of those trying to grasp an understanding of who they are and how they fit into their current society. I actually started writing "Home Keeps Moving" over years ten ago when I was 19 years old but realised the task was too overwhelming at the time. As I’ve gotten older, I have realised how exciting, colourful and unique my own childhood was and I wanted to share that with others. 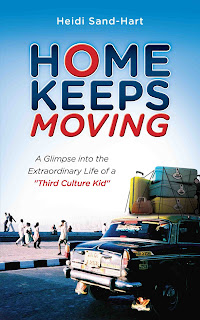 4. Many people want to write a book someday, but you did it! Who was your inspiration and what was the key to your success?

I was inspired to write a book when I discovered there were hardly any personal accounts of growing up as a "Third Culture Kid" out there. There is the TCK bible (as it's referred to) but not a lot which actually tells the story first hand of constantly moving, adapting, transitioning…leaving friends, houses, pets, schools and starting all over again. I realised as I entered my early 20s how much my unusual upbringing had moulded me and wanted to reach out to others in the same place. I also hoped the book would be insightful to people from conventional backgrounds and can be used as a tool to understand their TCK friends/colleagues/spouses better. As for who inspired me to write it…conversations with my brother were the catalyst but I just had a desire within that wouldn't fade away so ten years down the line, I picked it up and gave it another go!

5. What's your advice for other TCKs or for anyone wanting to write a book?
Stick with it until the end! It seems like everyone has started writing a book at some stage of their lives but not many people complete them. It is tough going at times but make sure you surround yourself with supportive people and keep giving yourself goals to achieve.

6. What did you most like about growing up abroad?
I loved spending so much of my childhood in India…a culture so completely opposite to my European heritage. It's colour, vibrancy, smells and smiles were captivating and I loved all the travelling and tropical holidays we had there. I loved the chaos and freedom…as a child, it felt like you could do anything since it's not ruled by laws like Northern Europe.

7. What was most difficult?
I suppose missing friends in England was the hardest thing and I remember missing sweets and food but we adapted quickly and had a rich life in India in different ways.

8. How did living abroad influence your choice of career or study?
Living in India and seeing the value of my mum's work (orphanages) birthed in me the desire to do something similar with my life. It seemed that all around me people had made unconventional choices with their lives and it gave me the boldness to not do traditional further education (university) but pursue my dreams instead.

9. Can you say something about your social network? In how many countries do you have friends?
Good Lord, that's a great question…one that I can't answer though! It must be close to a hundred countries for sure but don't hold me to that! Social networking sites (such as Facebook) have really helped me stay connected to dear friends around the world. It makes them feel closer even though I rarely get to see them in person.

10. Which languages do you speak? Do you have advice on learning languages for families living abroad now?
I speak English and Norwegian (limited) and a small mishmash of other languages. I studied French and German at school but unless you immerse yourself in the language, I don't think it sticks for as long. Growing up as a TCK is definitely the best opportunity to jump leaps ahead with languages…it's a great advantage.

11. When and where did you first hear of the term “third culture kid (TCK)? How did you hear of it and in which way did it help you?
I first heard the term "Third Culture Kid" as a 16 year old when I was living in India. My cousin had sent an article (by David Pollock) to my parents and it suddenly jumped out at me. I was extremely excited to know I belonged to this tribe and felt proud of my upbringing.

12. What characteristics have you developed or do you think you have developed because of growing up abroad?
A deep love and passion for travel and different cultures. I have a travel bug that can never be eradicated…the more I see, the more I realise there is to see. I love seeing and recognising the positives in both the European and Asian ways of life despite being opposite. The world isn't rigid, there is no right or wrong. We are just the result of the bubble we grew up in and luckily, my bubbles are many and large. TCKs generally have cultural awareness and can pick accents easily!

13. Are there things related to growing up abroad that are difficult for you to this day?
I constantly miss the other side…the grass is always greener and when I'm in London, I constantly dream of being in Asia. When I've been there for a while, I usually romanticise London! The hardest thing is always having a part of you missing…

14. How was it to return to your “home country” (passport country)?
This one's tricky because my passport growing up was Norwegian but I was born in England and hadn't lived in Norway until I was 16. When I did move to Norway though as a teenager, it was a huge shock and very difficult time for me. I didn't fit in at all and actually wanted people to think I was English! I talk a lot about this in the book so I will leave it at that…

15. With which countries do you feel a bond? Where’s home?
The strongest bonds for me are definitely with India and England. Despite my parents both being Scandinavian (Finnish/Norwegian), I have never had an affinity with either of their countries because we didn't spend much time in either of them when I was a child. It was just summer holidays and we always thought upon England or India as "home". India lives in my blood, constantly calling me back. And England…it's the country of my birth, most of my early childhood memories and bonds occurred there and I have chosen to bond with it. I understand how everything works…the humour, the system, the people, the transport…but deep down, I still know that I'll never truly fit in. That's why I love London…it is so multicultural and you can be from anywhere in the world yet be accepted as a Londoner. For now, it's "home".

A thank you to Heidi for the interview. Heidi's blog is: homekeepsmoving.blogspot.com. You can follow her on twitter: @HomeKeepsMoving. By the way what would your advice be to third culture kids?