A Christmas Giveaway "Fly Away Home"

Maggie Mykleburst is the author of the book "Fly Away Home". It's actually a great title for a giveaway at this time of year. Isn't it what we all want to do at Christmas: fly home! Sometimes the question is where's home? Maggie was born and raised on the Jersey Shore. She is married to a Norwegian and they have lived as expats in Houston and the Netherlands.

The giveaway is a signed copy of Maggie's book, it will be send to you.Thank you so much Maggie for providing the giveaway and for answering my questions. I really enjoyed reading the answers, I hope you do too. To enter the giveaway leave a comment at the end of this post before the 31st of December 2012. I will draw a name from a hat and publish the name of the winner here on the blog on the 31st. The competition is closed now. 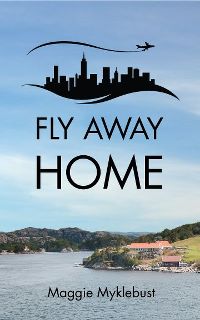 What was the reason that you were living abroad?
I’m actually still living abroad. I was born in the US and moved to Norway with my three children in 1988. I married a Norwegian and had two more children. My husbands job took us to Houston in 2005, where I became an expat in my own country. In 2007 we moved to the Netherlands, in 2010 we returned Norway.

Please tell us about your book "Fly Away Home".
Fly Away home is a memoir of my life. It starts before I was born, with my grandmother’s struggle to leave Norway and move to America. Years later, in a cruel twist of fate, I was forced to flee America with three young children and relocate in Norway. The story continues as I strive to find identity, happiness and love.

What inspired you to write your book?
I was inspired by the need to tell my side of what is at times, a very complicated story. To explain to my children and to future generations of my family the decisions I made, and why I made them.

Many people want to write a book someday, but you did it! Who was your inspiration and what was the key to your success?
It started with scrapbooking, putting the events of my life together with pictures. I wasn’t a writer, but I knew I had a story to tell. Then while living in the Netherlands, I attended a ‘Write Your Life Stories’ class, which definitely helped put me on course.

What's your advice for other people or third culture kids wanting to write a book?
Don’t pressure yourself. Make an outline of your story and then take it one chapter at a time. You’ll be surprised how memories come flooding back. I had to keep a pad and pencil with me at all times.(If you don’t write things down on the spot, there’s a good chance they’ll disappear) Don’t get yourself tied up with trying to write like a professional, let it flow naturally. Later, a good editor can help you polish it up and it’s not as hard as you think to self publish.

Do you have any interesting new projects and the moment?
I’m taking an advanced writing class in Norwegian, who knows maybe someday I’ll be able to translate my own book into another language. (Big dream)

What did you most like about living abroad?
What was most difficult?
I’ll start with the most difficult... Learning to talk Norwegian! I only lived in the Netherlands for three years and didn’t feel the need to learn the language. But I’ve made Norway my home and my husband is Norwegian, so learning the language was a must.
What I like most about living abroad is all the new people I’ve met and the different experiences I’ve had.

How did living abroad influence your choice of career or study?
There would most likely be no book if I had not left America, since my book is mostly about having to start over. I probably wouldn’t have studied Norwegian either.

You parented cross-culture kids, what was that like?
After moving to Norway in 1988, my three older children had to spend summers in America with their father and that was hard. Two of those children moved back to America after finishing school, so now I have children in two countries. MY two youngest children were born in Norway, but after living in the Netherlands for three years they had difficulties readjusting to the move home. All of my children like to travel, they have compassion for others, an interest that extends beyond borders and a variety of friends from different cultures. I’m proud to be the mother of five, cross-culture kids.

Which languages do you speak? Do you have advice on learning languages for families living abroad now?
I speak English, Norwegian and can read a Dutch menu (hehe). If you’re living in a country temporarily and have the time, its always good to learn a new language. If you’ve made a new country your permanent home, then in order to fit in, I think it’s important to learn the language.

Do you have advice for families with children making international moves?
Listen and be supportive, but chances are they’ll adjust to their new surroundings faster than you. Mine went to school, joined sports and made new friends before I knew my way around the grocery store.

When and where did you first hear of the term “third culture kid (TCK)? How did you hear of it?
My children had very little trouble adjusting to living abroad, the problem for us came when it was time to move home again. They didn’t want to leave their ‘new’ life. It broke my heart when my son told me he no longer felt like a Norwegian or an American and that his ‘home’ was in the Netherlands. In looking for information to help, I came across the phrase ‘third culture kid‘ and was amazed by what I’d read. My son still refers to himself as a citizen of the world instead of a Norwegian or an American.

Do you have advice for TCKs or adult third culture kids (ATCKs
Although I think its great to consider yourself a citizen of the world, I still think its important to know where you come from. To feel a sense of pride and belonging to your passport country.

What characteristics have you developed or do you think you have developed due to living abroad?
Living and traveling far from home has definitely made me more adventurous and self reliant. It has also taught me to be more openminded and respectful of people from other cultures.

How was it to return to your “home country”?
This is a tricky question for me to answer. Although I’m American and proud of it, Norway is my home country now. Its where my house is, its where I live and it felt good to return.

With which countries do you feel a bond? Where’s home?
I feel a bond with the Netherlands, I will always be an American and Norway is my home.

Seeing as you lived in the Netherlands too: what is your funniest memory of the Netherlands? Anything you miss from here?
The first week we were there I was tired, cold (we had just come from Texas) and confused (didn’t know my way around or anything about Holland). With our kitchen supplies still in boxes, we took the children to McDonalds for dinner one evening. After receiving our order and finding a table, we started to eat. Realizing the girl had forgotten to give us ketchup and not seeing a self serve station, I went back and asked for some.
Me: “Could I have some ketchup, please?”
Her: “How many packets would you like?”
Me: “I don’t know, just give me a handful.”
Her: “Okay, that will be two euro’s please.”
Me: “What?! I have to pay for Ketchup?!”
Her: “Yes, 25 cents each.”
I paid the girl, went back to our table and start yelling at my husband (like a loud American) “Can you believe I had to pay for Ketchup? I’ve never paid for a ketchup packet before. What kind of country is this?!”

What I miss most about the Netherlands is riding my bike everywhere (here in Norway there are few bike paths and lots of mountains). I also miss buying fresh cut flowers every week (here in Norway flowers are mostly imported and therefore expensive). I miss the tulip fields in the spring and the park (De Horsten) which was directly across the street from where we lived. I miss shopping in the Hague, the market in Leiden, the beach in Scheveningen and the charm of Wassenaar. I miss everything (except paying for ketchup, hehe). Luckily I still have friends there and visit quite often.
Thank you!

If you are interested there is more information on Maggie's website www.flyawayhomebook.com. You can find her on twitter too @flyawayhomebook. The competition is closed. The winner is a  Dutch third culture kid living in Norway.